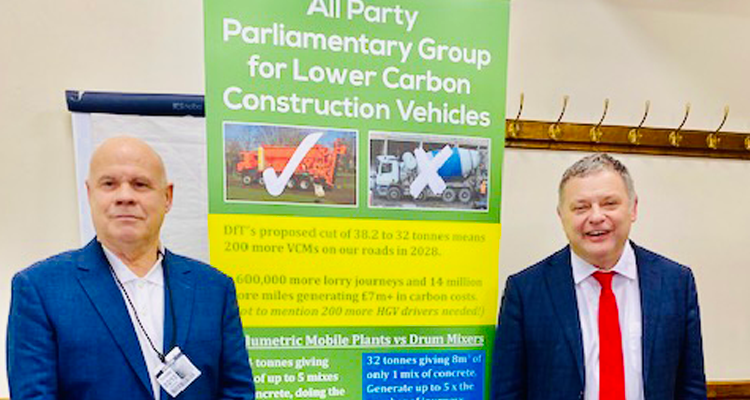 Launching the All Parliamentary Group for Lower Carbon Construction Vehicles

An All Parliamentary Group APPG has been established to save £7m in carbon costs and prevent an extra 600,000 lorry journeys on UK roads every year.

The APPG for lower carbon construction vehicles supports the volumetric concrete mobile plants (VCM’s) which are under threat from a proposed ban on the weight of these vehicles from their current 38.4 tons on 4 axles and 44 tons on 5 axles by 2028 – which means they cannot do their job. If successful, this ban will negatively impact the VCM industry and wipe out certain sectors completely.

Traditional drum mixers, which are the alternative method to ship concrete, waste large amounts of concrete because they typically have a 2-hour window to deliver and pour their loads. By contrast, VCMs carry all the ingredients for making concrete in separate containers (cement, aggregates, sand, water) and only mix them when they reach the site and make and pour the concrete on demand. With VCMs, there is zero waste. By contrast, with Drum mixers, often the whole load can go off because of traffic and other delays – and ends up in landfill. VCMs are also the lifeblood of utility and highways authorities (HAUCs) carrying out emergency repairs.”

If this ban is implemented, then the VCM’s will not be able to perform the job they were designed to do and will effectively be removed from the roads. The result of this is that carbon emissions will increase and there will be an additional 600,000 lorry journeys on UK roads due to the additional vehicles needed to transport, mix and pump concrete.

The Batched on Site Association (BSA) – a self-regulatory body that works with the UK Government to help ensure high standards of health & safety and quality control across the industry is advocating a solution to minimise carbon emissions. The BSA’s proposals to maintain present weights will allow the Department of Transport, to enhance the Government’s CO2 reduction targets without harming roads or bridges. Forcing lighter trucks on the road will increase the number of vehicles required to meet the same demand for any-mix concrete. Cutting c20% from VCM capacity from 2028 will add 23 million more lorry kilometres, 600,000 more lorry journeys, and add 119,600 additional tons of CO2 into the atmosphere, together with associated extra carbon costs in excess of £7 million pa.

The Batched on Site Association (BSA) that represents the interests of the VCMs has been briefing the 126 MPs who represent constituencies where the VCMs are manufactured or operated and recently led to the creation of the APPG.

The APPG has requested a meeting with Transport Secretary Grant Shapps to persuade him to withdraw the VCM ban scheduled for 2028, and they intend to stage a debate in Parliament.